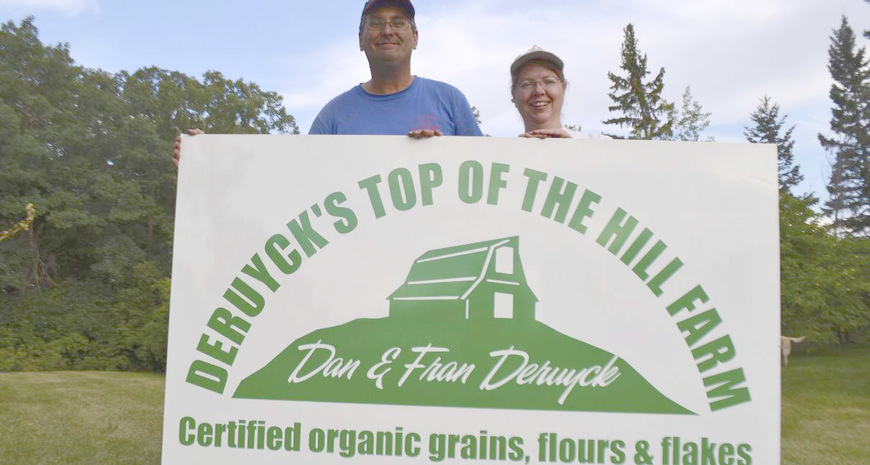 DeRuyck’s Top of the Hill Farm is located in southwestern Manitoba in the Tiger Hills between Treherne and Holland. It is from the rolling terrain of this mixed organic grain and cattle farm, worked by Dan and Fran DeRuyck, that Tall Grass Prairie Bread Company receives its supply of Rye grain. Rye is used in the production of some of the Desem breads at the Tall Grass bakeries. This centuries-old traditional European style bread is made without the addition of commercial yeast, oil, sugar or honey. In the Desem fermentation process, a natural culture occurs, which allows the bread to rise. Favourites include Heavy German Rye and Onion Rye. These loaves are baked in our brick-lined oven, a process that brings out the finer details of the dough. The result is loaves that are crusty on the outside, while being soft and chewy on the inside. The distinctive rich, tart flavour of Rye is also a central ingredient of daily baked multi-grain breads including Light Sourdough Rye. Whole Rye is touted by the George Mateljan Foundation as being one of the most nutritious foods in the world. Because it is difficult to separate the germ and bran from the endosperm, Rye flour usually retains many nutrients. For example, a third of a cup of dry, whole grain Rye nutrient value consists of 72% manganese, 34% fibre, 26% phosphorus, 22% copper; 16% pantothenic acid and 15% magnesium. Rye fibre has a high water-binding capacity, which quickly leads to the feeling of being satiated or full. Rye’s high fibre content is further believed to slow the rate at which Rye starch is digested into sugar, which in turn has positive impacts on cholesterol levels, the cardiovascular and gastrointestinal systems. Fran DeRuyck loves the farm, and what they grow. She loves Rye. “Normally it’s used in making artisan breads,” she says. “But I like regular Rye bread, as well. And then I also put some cracked Rye in my porridge.” Within the blink of an eye, she rolls off a list of grain-based ingredients that go into her porridge, concluding with cinnamon and ground flax. Fran’s husband, Dan, provides more of an equal opportunity assessment of Rye. “Food in general goes good for me,” he chuckles. Fran joins in the laughter. This is a couple committed to organic farming, following in the footsteps of his parents, Gerry and Marie, who run the nearby DeRuyck’s Organic Farm. “I find organics is a lot better for the land and a lot better for us,” says Dan. “And in the overall picture, if we keep up with organics, we’ll all be in a better situation.” Rye grain is one of the most recently domesticated crops, first cultivated around 400 BC. It is thought to have originated from a wild species that grew among the wheat and barley fields of Germany.
Tall Grass Prairie Bread Company and Grass Roots Prairie Kitchen acknowledge that we are located on the ancestral lands of the Anishinaabeg, Dakota, and Ininiwak. We would also like to acknowledge the other First Nations such as the Anish-Ininiwak, Dene, and Nehethowuk who gathered at this ancient site sharing these lands and waterways. We also acknowledge that we are on the homeland of the Métis and are also grateful to the First Nations of Treaty One who agreed to share this beautiful prairie land giving us the opportunity to cook and bake for you.